In other news, the first game has done quite well this month with over 500 sales. I certainly didn't expect it to be shifting decent numbers 15 months from release, but it's very welcome. 500 is quite a lot of people when you think about it, isn't it?

In otherer news, I had a good idea for a new game in the bath today; a 2D shooter with a real sense of scale and more fruit. Once I've finished AJ2 I'll probably get cracking on it. Possible title: SPACE ORANGE.

Here is a frame from the Apple Jack's Great Escape intro, currently being worked on by a nice chap called Neil, who's a copywriter and who recently got married. Wave to Neil everyone! 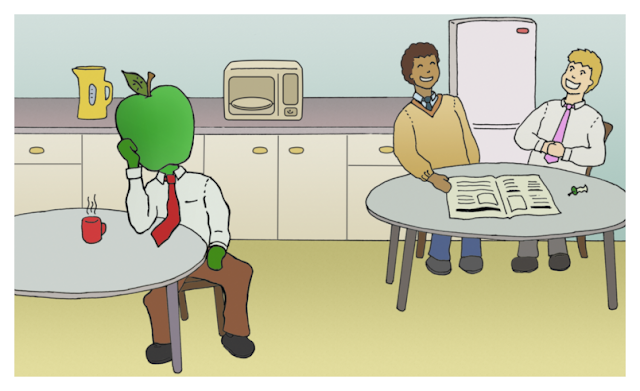 Hmm, not much to report except that designing the levels for this game is taking longer than for the first Apple Jack, for these two reasons:

1)  Most of them are larger.
2)  They are now full of moving objects and often the speed and position of these blocks/ platforms/ switches/ saws has to be worked out using trial and error; changing something in the level editor and then playing the level to see if it works.

On the upside, having gotten everything working, some of the levels are, if I say so myself, very clever and unique. Since level 20 I've started adding switches which 'turn off' blocks of scenery as long as something is pressing them down, be that a block, an enemy, or Jack himself. I'm almost spoilt for choice, which probably isn't helping in terms of a speedy release.