Just a little message to say that Apple Jack 1&2 is now available on Desura:

If you mosey on over to the latest Indie Royale bundle situated here:

you will find none other than the PC versions of Apple Jack 1&2! See!

Needless to say, the more of these bundles that are sold, the more money I get from them, so if you haven't already got them on Xbox now will be a perfect time to pick them up! You even get four other games absolutely free. I actually don't know very much about them but I'll have a guess based on their names:

Thunder Wolves - a game where you play as a pack of wolves caught in a thunder storm.

Stellar Impact - a game set in 2008 where you play as Stellar McCartney whacking Heather Mills over the head with one of her false legs.

100% Orange Juice - a game where you play as the quality control manager for Tropicana as he tests batches of orange juice to ensure that they comply fully with the trades description act.

And all of that for the price of a good-quality frozen pizza!


PS - Apple Jack 1&2 have also been accepted by Desura and should be available there very shortly. If I have promised you a code for the game they will be sent as soon as it is up.
Posted by Tim at 08:11 2 comments:

The PC release is now on Steam Greenlight, so please vote for it:

Frankly, I've put it up more as a cheap way to advertise the game ahead of its release than in any expectation of it getting greenlit, but I certainly wouldn't complain if it did make it on to Steam proper. You never know, stranger things have happened (like when it rained frogs that time in Brazil).

Anyway, if all goes to plan you should be able to buy it somewhere else sometime in the beginning of September. There may even be more than one way to get hold of it at release...
Posted by Tim at 10:10 6 comments:

I've stuck Apple Jack 1&2 info on IndieDB and uploaded 8 level demos of both games.Get them here:

All that's left is to email various game distribution services to see if they are interested.

PS. I forgot to add the names of all the testers who helped out with the games last year to the 'credits' menu. Rest assured I will fix that for the release and send out download codes for all testers when  the full games are up.
Posted by Tim at 03:18 3 comments: 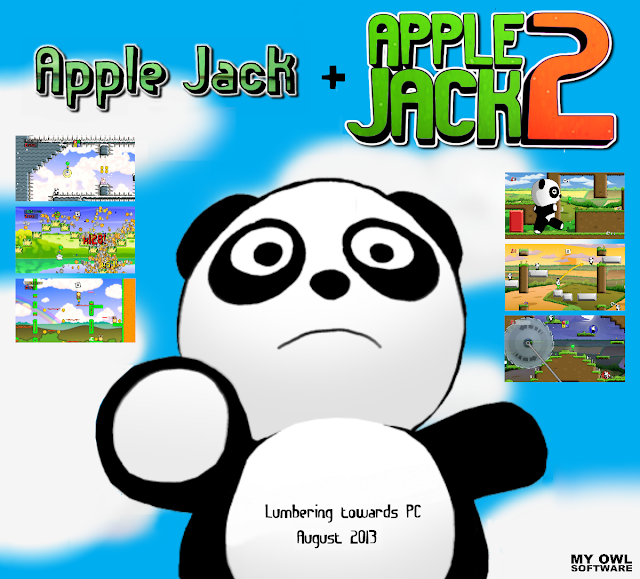 It's been an absurd amount of time since I posted an update on here, during which not a lot of progress has been made on the PC versions of AJ1&2, or indeed much else programming-wise.

This is mostly due to my poor, abused back, which has spent several years propping up my arms and head while I tap away at the computer, with no back rest to support it. Turns out that this is VERY BAD, and the final stretch Apple Jack 2 pretty much knackered it completely, to the point where I had to lay off the computer work until I could make it stop bloody hurting all the time.

Thankfully, after getting a proper chair and doing stretches for several months it's finally back to normal and I can get on with finishing the conversions. No more testing is required at this stage, but thanks to everyone who has continued to offer help in that area.

Once THAT'S done, I can finally start to work on a new game! There are dozens of ideas ready to go, from the simple to the absurdly ambitious. The one I really want to do is a very peculiar shoot'em up, which would involve hooking up with a decent artist (due to the amount of drawing required), and an actor to play the part of a giant space orange. Brian Blessed would be the perfect man for the job, but he's a bit expensive and there's a lot of dialogue.

Other ideas include a stealth game, a one-button platformer, a 3D platformer, a body-hell beat'em up and a puzzle game. I've also got the set-up and plot of Apple Jack 3 nailed down, but I really want to work on something else first.

Progress should be swift on the PC conversions, so keep your scanners peeled for more updates.

P.S. To Futil1ty in the comments section of the previous entry - there isn't really a trick to completing 5-13, you just have to be good at wall jumping. It was actually even harder when the game was first released, but so many people got stuck I had to patch it. Think yourself lucky!